Oh What a Lovely War

On Saturday I found myself heading once again for the Nene Valley Railway – you might think I’d have had enough by now, but the NVR keep on putting on different and exciting events that deserve support. This weekend was loosely termed as a 1940’s event, but themed largely around the war years. The programme was interesting; ENSA style performances on the station platform at Wansford, topical sales stands and food in the café, battle re-enactments at Wansford, vehicles on display and a general dressing up was encouraged. I felt that this was worth visiting, and went with the aim of hopefully being able to create a film from the day. 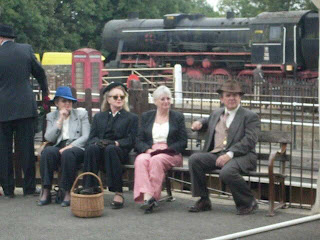 I was surprised at how many people dressed up in period costume; not just expected military uniforms for the re-enactors, but civilians as well – whole families in many cases. Almost everybody was happy to be filmed, and provide atmosphere to the planned film. ENSA singing performances were held all day with various singers; headlining was Fiona Harrison who delivered three completely different and thoroughly enjoyable sets throughout the day. 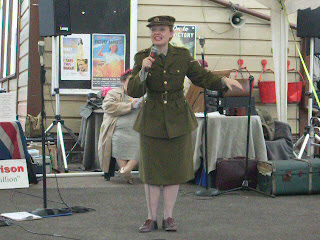 The train in use was favourite 73050 City of Peterborough with the crimson and cream MK1 set. This would make a nice backdrop to the station scenes as the soldiers went off to war. 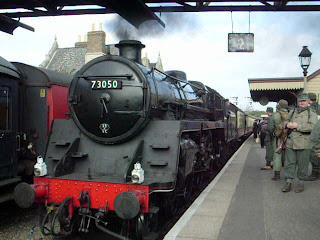 I’ve mentioned in previous posts that the NVR has a good collection of foreign rolling stock, including a 5-car set of olive green DSB coaches, plus a good fleet of Wagon Lit coaches. I rather thought that they missed an opportunity by not using these during the weekend to create the European aspect of the war. I wasn’t overly impressed with the bright red rake of Royal Mail parcels vans parked up in Wansford Station either as they spoilt the 1940’s image so carefully recreated elsewhere. They could easily have been moved up to the coach siding near the tunnel and left the station clear for the events of the day. I don’t know who was in charge of that part of the operation, but I do know that they are a stupid boy! 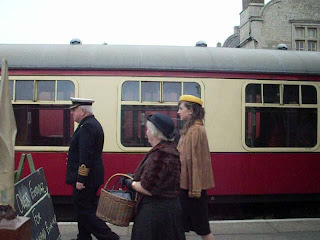 Highlight of the day was the two battle recreations. The first was held in Wansford Yard; this is adjacent to the station so there was good visibility for spectators. The battle was a re-enactment of an actual battle that took place during the assault on the bridge at Arnhem (later filmed as A Bridge Too Far). The battle was realistic with plenty of loud bangs, gunfights, mortar bombs and explosions that blew eardrums inside out. One quaint point was that the battle was due to start at midday, but the incoming train was delayed, and of course many passengers would want to see it. This led to the unusual tannoy announcement, “Owing to the late arrival of the incoming train from Peterborough, the start of the war will delayed by ten minutes.” This could actually be the way forward for world peace – get Notwork Rail to organise the next war. With everyone taking part stuck at Crewe because of over running engineering work, they’ll be too busy filling out compensation claim forms to worry about blowing each other up. Thus, a lasting peace will prevail – problem solved. 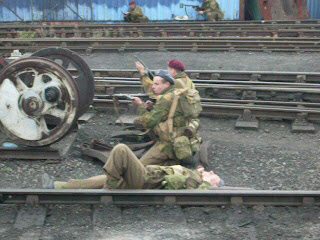 I’d got chatting to a bloke who visits many of these wartime re-enactions, and he told me that the second battle usually took place on the bridge at Wansford, where the railway crosses the river. It was dramatic, but viewing was restricted as the picnic area that looks onto the bridge gets very crowded and a good view is restricted. Well, he found the right person to be nice to, because with all my exploits on the NVR lately, I know my vantage points. We crossed the bridge and went into the fields – these give a fantastic position to get a good pan of the arriving train, and thus the bridge. Last year the enactment had been about the British forces attacking a German platoon that were attempting to blow the bridge up. This year was expected to be the same, so I set up ready to photograph the arriving train and then film the battle afterwards. However, things were different, and a new story had been planned. As the train approached the bridge, German soldiers stopped it. Then, from the first coach, a female resistance fighter jumped off and attempted to escape. She was challenged and shot by the Germans, which provoked a fierce gun battle from Allied Forces who were under the bridge, and who swarmed up the stairway to attack. 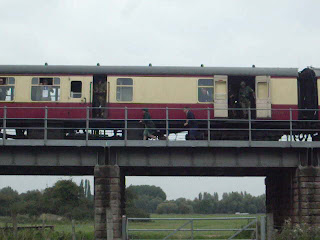 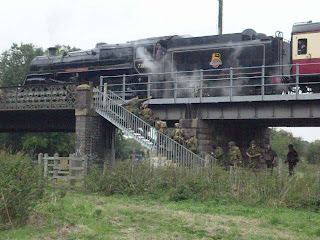 Further forces materialised on both sides of the train, and in the battle gradually drove the Germans back. It was an exciting spectacle, and from our grandstand viewpoint we had an excellent side-on view of all the action, which was perfect for filming. It just demonstrates how a quick and friendly chat can make such a difference to such an occasion. 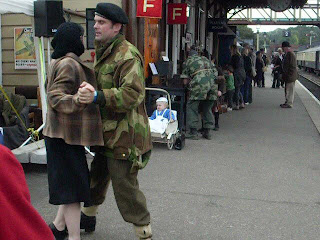 Overall, it was a thoroughly enjoyable event; well planned and executed, and I’d recommend visiting a similar such event in the future.

All pictures taken from screengrabs of video shot on the day.

Visit My Other Blog 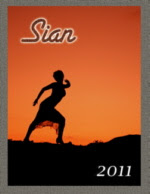 The English language has not been unduly harmed during the creation of this blog. Not suitable for vegetarians. This blog is produced in a nut-eating environment, so traces of nuts or nut oil derivatives may unavoidably be present. Do not eat this blog if you suffer from a nut based allergy. Whilst reading this blog, fasten your seatbelt, stow away all loose items and switch off your mobile phone as it may interfere with next door’s lawnmower. It is dangerous to jump out of a hot a hot air balloon once it has left the ground. This practise could cause injury, but not as much as smoking that kills, and nowhere near as much as drinking which can cause serious outbreaks of humour and enjoyment. Smoke 5-a-day, eat veg socially, breathe monthly and always practise safe sex by never giving out your phone number as some operators may charge and calls from mobiles will be considerably higher. Calls made after the lines have closed will result in instant death, and you may still be charged. Peace and Love, and don’t call me by my stage name.

Now Available on Amazon - My Book!

Experiences from a holiday in Belarus

Visitors From Around The World